My name is Susan Wards and my maiden name was Crust.  I grew up on the north side of Sydney, New South Wales but my father was born in Charleville, Queensland. This website is about the family, ancestors and some of the descendants of my Great-Great Grandparents George and Elizabeth Crust who were born in Lincolnshire, England. They arrived in Brisbane, Queensland on 1st November 1862, as steerage passengers aboard the ship Sultana. Their toddler son, George Robert, died of infantile fever during the 3 month long voyage and was buried at sea. Elizabeth gave birth to their second son, Samuel, 3 weeks after arriving in Australia.  For an account of the voyage of the Sultana see the Diary of John Harrop, a second class cabin passenger.

On the 7th June 1862, five months before George and Elizabeth arrived in Brisbane, Elizabeth's younger brother Robert Crust arrived in Moreton Bay, Brisbane aboard the ship ​Whirlwind. He married Eliza Lacey in 1865. These two Crust families produced many descendants, of whom many are still living in Queensland.

Elizabeth's maiden name was also Crust. George and Elizabeth were first cousins once removed as Elizabeth's father, James Crust and George's grandfather Michael Crust, were brothers. Another brother, Richard Crust was the great-great grandfather of Baroness Margaret Thatcher, Prime Minister of the United Kingdom, which makes her my fourth cousin once removed. As well, Margaret Thatcher's successor, Prime Minister Sir John Major, a sixth cousin to me, is also descended from the Lincolnshire Crusts. See Upper Crusts for more information about our famous cousins. 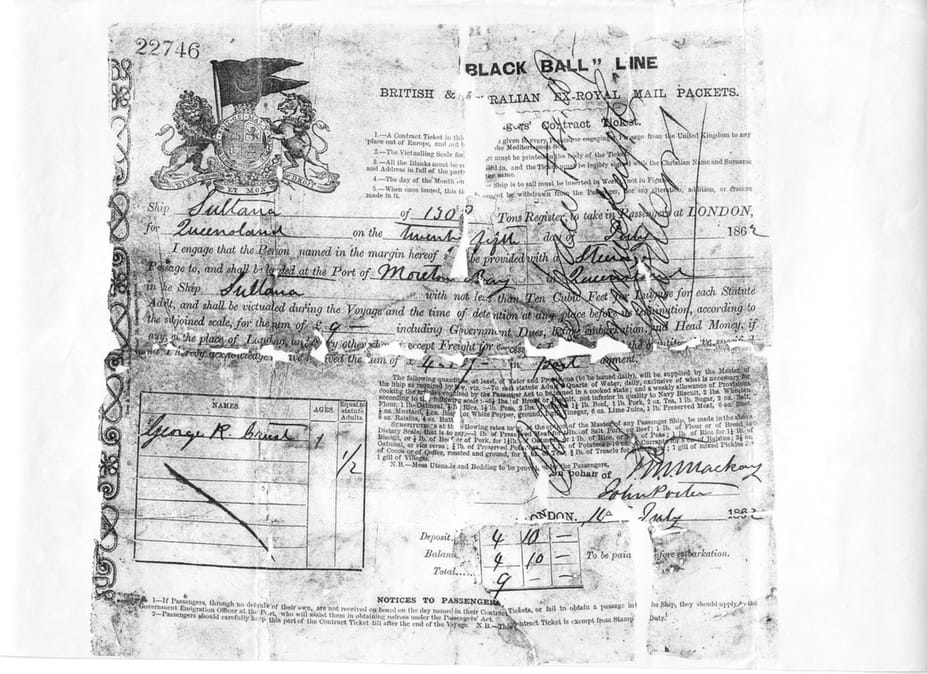 ​* The header image on this page is of a cottage at the Ekibin Tannery, Brisbane taken about 1871. (The people are unknown.) Around this time, George and Elizabeth Crust lived at the Ekibin Tannery where George worked as a Tanner. (Image Source: State Library of Queensland)
Updated November 2018
Powered by